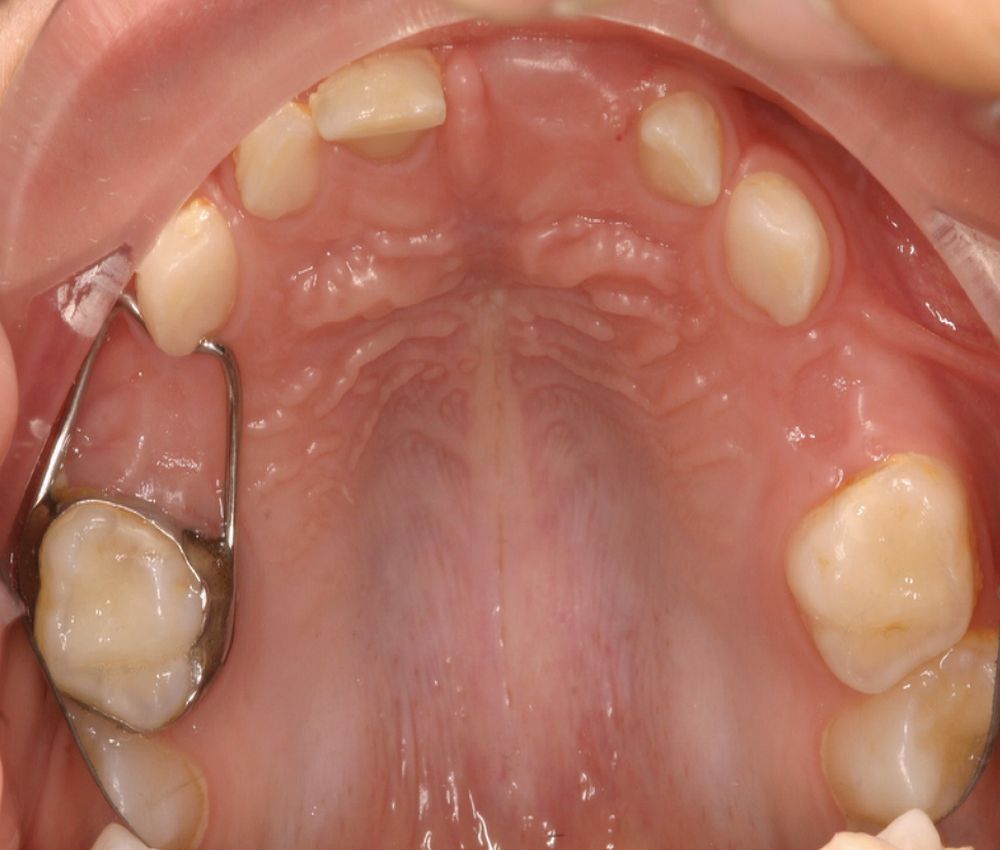 It is essential that children be evaluated for missing primary teeth in order to determine if any space maintenance is necessary.

As a general rule of thumb, it is recommended that all space created by a missing primary tooth should be maintained. When in doubt, maintain space.

If there is an early loss of a primary molar and the first permanent molar has erupted, space maintenance must be employed as soon as possible.


Doing so will prevent the first permanent molar from drifting mesially. If the first molar is allowed to drift mesially, it will not only eat up the Leeway space, but it can potentially interfere with the eruption of the premolars or canines.

Space maintainers are very important to keep this Leeway space intact until eruption of the permanent teeth occurs. There are two basic categories of space maintainers: fixed and removable.

As a rule, fixed appliances are generally used as space maintainers. The two types are unilateral and bilateral.

1. If a permanent tooth is erupting a properly designed bilateral space maintainer will not cause you to have to remove the new appliance you just placed.

2. If there is need for other space maintenance on the other side of the arch, a bilateral appliance would be a better choice.

This is where the mixed dentition analysis and the panoramic radiograph become useful.

Analyses such as the Tanaka and Johnston method measure one half of the mesiodistal width of the four lower incisors. Then by adding 10.5 mm to this number the space needed for the mandibular canine and premolars in one quadrant can be estimated.

Add 11 mm to estimate the space required for the maxillary canine and premolars in a maxillary quadrant. This method has good accuracy for children of European descent.

The lower lingual holding arch (LLHA) in the mixed dentition is readily used to maintain the Leeway space in children with minor to moderate crowding. Note the Leeway space maintained on the lower right segment between the first premolar and the cuspid.

The transpalatal arch appliance is used in the maxillary arch as a bilateral space maintainer.

If maximum anchorage is needed, a Nance button can be added to a maxillary appliance which touches the palate, preventing mesial movement of the maxillary molars.

The following case demonstrates a maxillary arch with no crowding and with a normal eruption pattern. In the mandibular arch, there is minor crowding that will be resolved by using the Leeway space that is maintained by using a fixed lingual holding arch.

When a patient receives a fixed lower lingual holding arch, it maintains the space that the primary cuspids and primary molars are occupying. Once exfoliation occurs, the anterior crowding can be distalized into the Leeway space. From the mixed dentition analysis, the following were labeled:

A. Corrected lateral position, which corrects for excess space or crowding in the anteriors, demonstrating the space the laterals will occupy when uncrowded and properly aligned.

B. True available space, which is measured from the mesial of the first molar to the the corrected later position.

There are three categories of anterior space maintainers: fixed, removable-functional, and removable-static. Anterior space needs to be maintained for esthetics, normal speech and phonetic development, and to allow normal oral maxillofacial development.

The best fixed appliance for anterior space maintenance in arches that do not need arch development is the Groper appliance.

The next category, removable-static, is represented by Hawley-type appliances that have an artificial tooth placed.

As permanent teeth erupt, adjust the acrylic to accommodate the needed space. Its main use is in trauma cases and cases that have congenitally missing teeth (for example, lateral incisors). A labial bow can be used to add retention if desired.