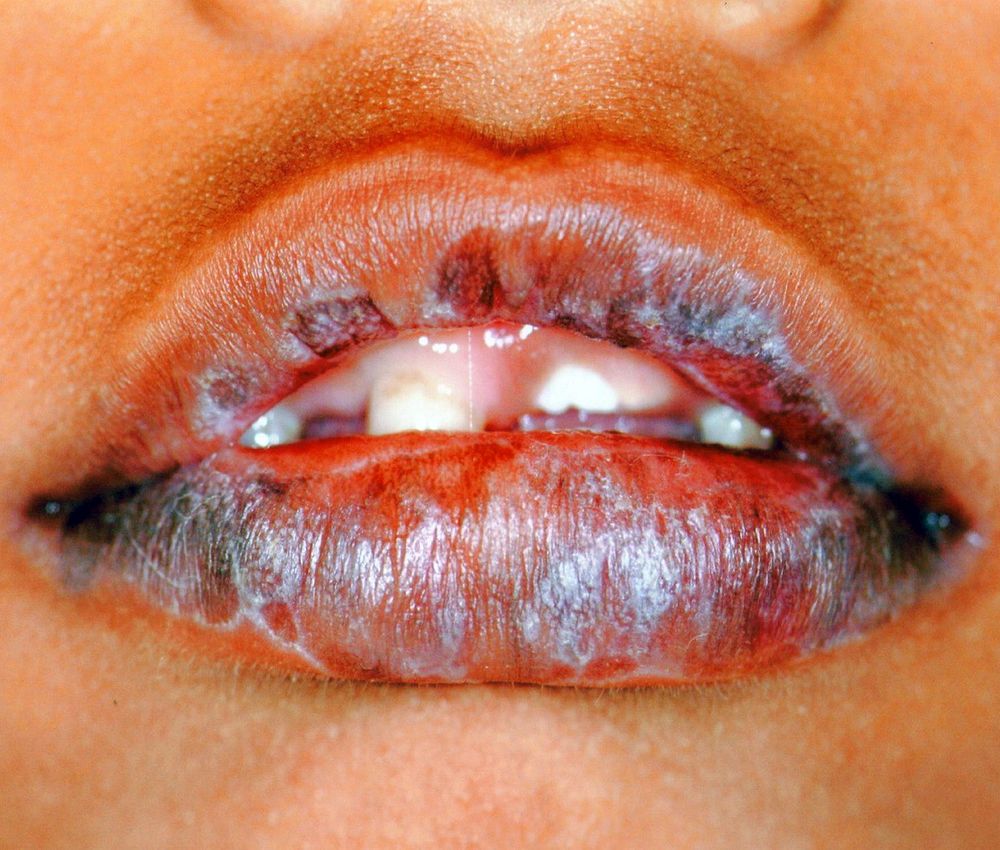 It affects 1 to 2 percent of the general adult population; the reported prevalence rates in the Indian population is 2.6 percent.

Oral lichen planus has been reported to be more frequent in females and occurs more predominantly in Asians.

The reticular form is the most common type and presents as papules and plaques with interlacing white keratotic lines (Wickham striae) with an erythematous border.

The striae are typically located bilaterally on the buccal mucosa, mucobuccal fold, gingiva, and less commonly, the tongue, palate, and lips. The reticular type has been reported to occur significantly more often in men compared to women and is usually asymptomatic. Erosive, atrophic, or bullous type lesions cause burning sensation and pain.

Oral lichen planus affects primarily middle-aged adults and is rare in children. There are few reports of childhood OLP in children in the literature. This article describes a rare case involving a 7-year-old child affected with OLP who was successfully treated with topical application of corticosteroid cream and plaque control regime.

A seven-year-old boy reported to the Department of Pedodontics with a complaint of white discoloration of the lips and tongue for the past eight months.

He gave a history of occasional soreness of the tongue while eating spicy foods. His medical and family histories were unremarkable and there was no history of any drug intake during the last 12 months. On examination, no cutaneous lesions were evident other than areas of gray to whitish striae arranged in lacy pattern on upper and lower lips.

The intraoral examination revealed white striae affecting the posterior buccal mucosa, dorsal surface and lateral borders of the tongue, and the floor of the mouth. The dorsal surface of the tongue showed two areas of depapillation and white patches in a circinate pattern measuring approximately 1.5 x 2.0 cm. The patient presented with a partial tongue-tie and was in the early mixed dentition stage with carious lesions in the lower left first and second primary molars; no amalgam restorations were evident.

Generalized mild to moderate plaque accumulation was seen. There were no signs of ulceration and the symptoms of discomfort were exacerbated by spicy foods. Routine hematological investigations and biochemistry yielded negative results. An incisional biopsy of the lower labial mucosa on histo-pathological examination showed hyperparakeratosis of stratified squamous epithelium and basal cell degeneration.

A dense band-like lymphocytic infiltration was found at the epithelial-connective tissue interface and there were areas of atrophic epithelium with saw-tooth rete ridges. Histopathological findings were consistent with a diagnosis of oral lichen planus. The patient was educated and motivated regarding a proper plaque control regimen that included brushing thrice daily with a soft brush and tooth paste and rinsing twice daily with alcohol free chlorhexidine.

The patient was advised to avoid eating spicy foods while his lichen planus was active and to use topical corticosteroid cream containing 0.1 percent triamcinolone acetonide (Kenacort), when symptomatic.

Initial review after a three-month period showed a reduction in symptoms and severity of the reticular lichen planus. The patient is currently continuing follow-up.

The exact etiology of OLP is not well understood. However, OLP occurrence is related to a T-cell mediated immune response. Activation of the inflammatory mediator nuclear factor kappaB , and the inhibition of the transforming growth factor control pathway may result in the hyper-proliferation of keratinocytes, thereby causing the white lesions in OLP.

Current data suggests that OLP is a T-cell mediated autoimmune disease in which autocytotoxic CD8+ T-cells trigger the apoptosis of oral epithelial cells, leading to chronic inflammation. The reported prevalence of OLP in childhood is 0.03 percent, a figure significantly lower than that seen in adults.

This difference in prevalence rates has been partially attributed to the low number of associated systemic diseases, autoimmune phenomena, drugs, and dental restorations in childhood. Moreover, as the onset of OLP is insidious, the diagnosis may be missed because of irregular dental visits, a low level of symptoms, and ignorance .

Studies have related higher levels of anxiety and depression, mechanical trauma of dental procedures, lip chewing habits, and intake of citrus and spicy foods to the exacerbation of OLP. Chronic low-grade irritation from dental plaque and calculus has been suggested to cause exacerbation of gingival lichen planus. In our patient the gingivae were not affected with lichen planus in spite of mild to moderate accumulation of plaque.

Moreover, exacerbation of symptoms in our patient may be related to intake of spicy foods. Absence of cutaneous involvement in the present case is not unusual considering that associated lesions are typically found in only approximately 15 percent of patients with OLP. Handa and Sahoo had reported that seven out of 87 cases of childhood lichen planus presented with concomitant involvement of the oral mucosa and that only one child had isolated OLP. They suggested less common involvement of oral mucosa in children with lichen planus compared to that in adults.

However, Sharma and Maheshwari reported concomitant oral lesions in 15 cases of the total 50 children affected with LP. Our case can be considered rare and unique owing to its age of occurrence and involvement of lips, which has been reported to be less common. The diagnosis may be made using clinical features alone or may require clinicopathologic correlation to rule out malignant conditions or atypical presentations.

The differential diagnosis depends on the age of the patient, clinical variant of OLP, and the severity and persistence of lesions. The clinical differential diagnoses include lichenoid drug reaction (LR), leukoplakia, lupus erythematous, and graft versus host disease (GVHD). Lichenoid reactions to dental amalgam and drugs have been reported to exhibit histopathologic features similar to OLP. A detailed history and absence of amalgam restorations excluded the possible diagnosis of LR in the present case.

The age of the patient, pathognomonic appearance of reticular OLP (Wickham striae) on the buccal mucosa, and the histopathologic findings excluded the possibility of lupus erythematous, leukoplakia, and GVHD. Various studies have reported possible association or non-association of hepatitis C virus (HCV) infection and lichen planus and have related this to variations in genetic, environmental, and geographic factors. However, no such association was found in the present case.

Children affected with OLP are often asymptomatic or minimally symptomatic. The recommended treatment goal for most cases of lichen planus is controlling the severity of symptoms because there is no established cure.

The most widely accepted treatment for lesions of OLP includes topical or systemic corticosteroids. Topical corticosteroids are the drugs of choice for treating mild to moderate symptomatic OLP because they have fewer side effects. However, widespread, symptomatic lesions require systemic drugs. Most patients with the reticular pattern of lichen planus are asymptomatic and require no active treatment.

Plaque control is crucial because OLP is an inflammatory condition and local irritants, such as plaque and calculus, consistently trigger exacerbations. An alcohol-free rinse should be prescribed to avoid desiccation and irritation of oral tissues. Furthermore, prophylactic use of 0.12 percent chlorhexidine gluconate rinse reduces the incidence of candidiasis during the corticosteroid therapy.

Other documented modalities of OLP treatment include retinoids, cyclosporine rinse, PUVA treatment, dapsone, and cryotherapy. The use of other modalities such as CO2 laser, Diode laser, and photodynamic therapy have also been reported.

Topical corticosteroid therapy and a plaque control regimen in children with symptomatic reticular OLP have shown favorable responses. Although OLP in childhood is rare, pedodontists should be aware of its clinical presentation, diagnosis, and management. Although not yet reported in children, periodic follow-up visits should be emphasized to evaluate possible malignant transformation.